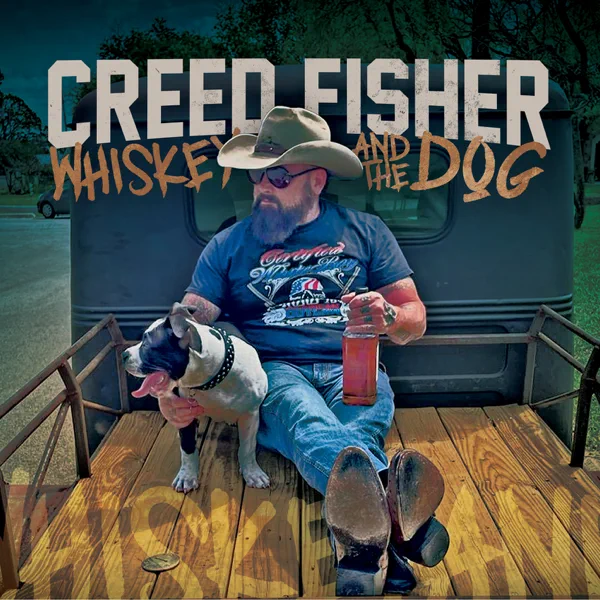 Today our Trex Road brings me back to tell you about an artist who in his Texas is one of the references of the outlaw country and who has seen in recent years to overflow his fame in all states where there are lovers of independent country. I had already told you about Creed Fisher in two previous articles and I had anticipated that they would not be the last, given the exceptional prolificacy of ours. And in fact, here we are in 2021 again to tell you about a brand new record. Whiskey and the Dog is his third album of this year (fourth if we count the greatest hits) and none of these is negligible if you love country rock inspired by the greats of the past. The bearded Texan has a rare ability in the world of American country music, produces credible and inspired records with an impressive frequency. The record in question is quite long, 14 pieces for over 50 minutes of music played for real, production that works chisel and recording took place at Fort Worth Sound Studios. The band is not the usual that follows everywhere live Fisher, among whose ranks militates compatriot Emanuele Pistucchia Italian pride of the six strings, but it is really first level. Among all I mention the legendary Milo Deering who in the record takes the violin but also the mandolin, the dobro, the banjo and pedal-steel. A multi-instrumentalist who has played on so many records that by now you lose count. True legend of Texas music. The work starts with High on the Bottle and the direction that will take the work is immediately clear and continues the story that began 9 years ago with his debut Down Here in Texas, when he left professional football and picked up a guitar Creed Fisher dreamed of being the new reference of the Texas country. Here mission accomplished, the song is outlaw country to the core with sprays of honky tonk in the manner of the great Hank Williams Jr., electric enough, with the powerful voice of Creed to lead the band. The next This Town is splendid, an intense country ballad that has its secret in the lyrics. He’s a great storyteller, as well as a great songwriter and here he proves it. An American story, pride, feelings. An artist who tells things has lived, the sincerity of what he sings exudes from this piece. The title track is pure outlaw country, no frills, no special effects. A love story that goes wrong is the subject of some of the most beautiful American songs and this makes no difference, the plot between guitars and pedal-steel is really exceptional. One of the most beautiful and incisive songs of the lot. Hundred Dollar Short is an almost red dirt country piece, electric, intense, engaging. A song that will burn his already fumigants live that are now a must for those who pass by there. Watch the movies on the net and you will not be disappointed, locals set on fire by a music that starts from the soul and arrives with songs like these to the heart of the people I work, the famous blue collar, the backbone of the truest and bloodiest America. The solo is really nice. Creed’s voice seems to have been created for songs like Gray Skies, a poignant acoustic ballad with the violin to lead us wistfully from a porch where the author talks about solitude and gray skies. The greats of the past have inspired and would be proud of this Texas boy who has fulfilled his dreams. Don’t California My Texas is a direct and no frills statement, a honky tonk and funny piece. Creed has no hair on his tongue and for that he is so loved, he loves his Texas as it is (I too to tell the truth but don’t tell anyone) and wouldn’t want it to look like something else. My favorite piece, 100% Creed Fisher. Another ballad and other little jewel, The Good Ol’ U.S. of A., a dedication to his country and to the men and women who with their work have helped to build the homeland of the dreams of so many people. The voice of CF is always on the shields, intensity and power. Down to the Riverbank is an almost southern rock piece, powerful and bad at the right point and the final guitar solo and then hammond, are to be heard absolutely. Here you play for real and even this song could set fire to some clubs down there in Texas. Intense ballads and true stories, this is the secret of Creed Fisher, they are lived stories. No one told them, they are in the first person. That’s why his entourage is so strong. Listen to Jesus, Haggard & Jones. Here the country outlaw is all here in the lyrics of this piece and in its music accompanied by the succession of guitars and pedal-steel. One of the most intense and beautiful country songs of this 2021, the work of the support band then is to lick the lips. A record that looks like that of an artist who after years had something to prove, but instead it is the work of an artist who this year had already baked 3 records and all of the highest level. Here is the exceptional nature of this artist is all here, prolific as few but also endowed with a pure talent in songwriting. Credible and never banal, always faithful to himself and his fans. If you’re not used to outlaw country sounds and want to know how a record of this genre sounds so much American, that has gone through golden years and dark years (the 80s for example), put Whiskey and the Dog on your plate and treat yourself to this Texas journey through real life stories, enlivened by a great voice and a great band, then if you happen to be there do not miss a concert, live is even better.

(you can find original italian article at this link : https://www.ticinonotizie.it/creed-fisher-whiskey-and-the-dog-2021-by-trex-roads/ )