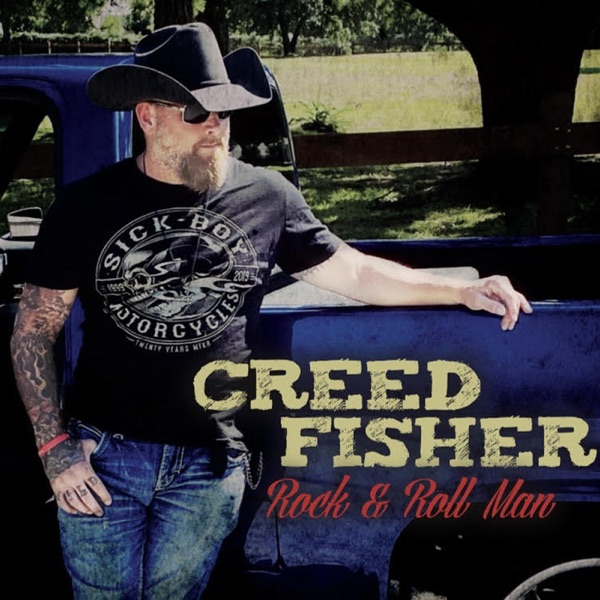 In the last two years I have explored more and more the independent American scene, especially the country and southern rock. I got to know a lot of artists who have a huge following despite self-production and self-promotion. One of the most positive notes (one of the few I add) of the invasion of the net in the music business is this, the ability to discover distant artists who would hardly reach us here being far from the majors and mainstream media. I could quote you the legendary Cody Jinks, Mickey Lamantia, Ray Scott, Ward Davis and the list would be truly endless. Here is one of my first discoveries in this underworld of great artists was Creed Fisher, a Texas outlaw who started playing and singing late (despite having the passion as a boy) after playing football for years in the minor leagues and debuting in 2012 with Down Here In Texas. The peculiarity of this artist is his prolificacy and an immense talent in writing many songs or choose covers to interpret perfect and to which he fully does justice in his versions. Not kidding since 2012 to today 2021 have been released in his name 10 records including this Rock and Roll Man that is from 2020 (but in 2021 two others have already been published: Go Out Like Hank and How Country Sounded Before It All Went To Shit Vol.1, plus a fundamental greatest hits). Probably the period of forced stop in the live activity has helped in getting to write songs but such a large production is capacity of a few, without being repetitive or quality sin. In an interview I had met the live and studio guitarist of Fisher, the compatriot Emanuele Pistucchia who told me last year of the growing fame and we can now say that he has reached our country, despite a niche music, very linked to Texas territory and life that is not always fully understood or loved in other latitudes. Choosing among the beautiful records, which I recommend you to discover all, released in his name was difficult, really hard but this Rock And Roll Man is one of my favorites and fully demonstrates an ability to master songs not written by him (except one) in a very personal way. The sound is perfect, the production idem and nothing is left to chance. The sound you will find in these 12 tracks is the most Texan the country can offer and the songs chosen are by artists who deserve full attention in their turn. The good Creed always swings between the classic country outlaw with strong rock sprays (search for live on the net you will understand that live always knocks down the locals), so in every record the influences are always multiple even if he is now the reference for other artists and it is a crazy result if you think that this man started late to propose his music to the world of Texas clubs. Just listen to the first song to understand what I’m talking about, Maybe I Am is a wonderful country with the strong spirit of the golden years in which the voice of Creed provides an excellent performance, in brilliant form and the band sounds great. The song is a cover of an independent artist that we strongly recommend to find out if you love real country music and that is Bryan James, another artist who has impressed me in recent months. And what about the beautiful ballad Ain’t Always Thirsty? Intense and melancholic (written by another fundamental artist, Ray Scott) with a female counterchant that perfectly completes the vocals of the bearded Fisher who has a voice born for this, to be a storyteller of country music so far from the blinding lights of the fake music business of the big radio and mainstream media. The pieces taken from the repertoire of another independent country rock artist, Zac Stokes are 5 (including the title track) and none is misplaced or flawed quality. Thanks to the writing of Stokes certainly but also thanks to the great interpretive strength of Creed Fisher, listen to the beautiful Bridges To Burn, with the work of dirty guitars and rock that follow the beautiful voice or the title track, a wonderful acoustic ballad that tells us about the difficult life of the musician, among a thousand concerts, a thousand roads, a thousand faces. Exciting and intense that the vocal power of Creed makes a small jewel. Perhaps one of my favorite pieces among the many beautiful engraved by the Texan. I could tell you all about it, as well as your records, but I could go on too long, but I can’t help but mention the honky tonk country rock and patriotic pride of Red White & Blue Jeans, beautiful that will surely be one of the highlights of his renewed live performances. Quote for the only autograph piece of the lot put to the end of the work and that is Headed For The Big Time, a country with a classic flavor, the spirit of Merle Haggard and Hank Williams inspires the music of this artist and you can hear, yes! Splendid closing of the umpteenth record that has climbed the charts of those who love the true country, outlaw without compromises, music God homeland and family, the winning Texas recipe. We hope one day to be able to applaud him from a local stage and to see live a great outlaw and his Italian guitarist.

(you can find original italian article at this link : https://www.ticinonotizie.it/creed-fisher-rock-and-roll-man-2020-by-trex-roads/ )

There are places that I have mentioned in my articles so often that sometimes I have felt repeti ...